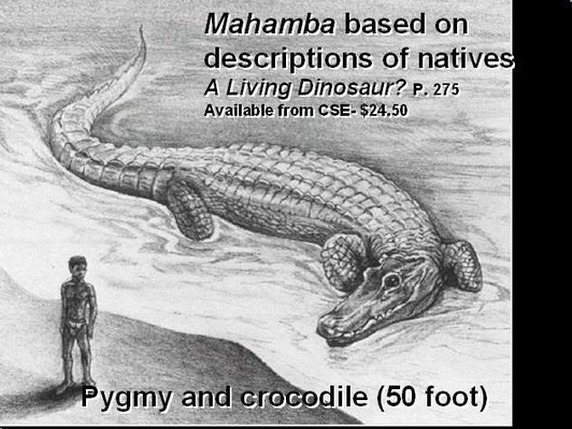 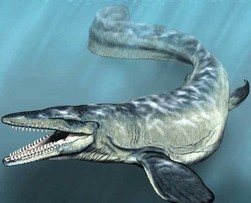 A mosaasaur
Scientists have a hard time believing that this so called giant crocodile is actually a dinosaur. There has yet to be any discovery of bones or skulls of any modern crocodile approaching the length of the Mahamba. However, the fossil records “show us that crocodiles can reach such vast proportions” (Downes).

Due to the lack of information, proof, and scientific evidence, scientists have concluded that there should not be research into this creature. The Mahamba is a confirmed cryptic, and people can chose to believe or not believe in what the stories have to say.

“The Linggar River is famous for it’s alligators (crocodiles) which are both large and fierce. Alligators sometimes attain to a very large size. I have never measured one above seventeen feet six inches, but I saw a well known animal, the terror of the Siol branch of the Sarawak (River), that must have been at least twenty four or twenty five feet long.”
-Spencer St. John, Life in the Forest of the Far East

"As the Nemesis was proceeding on wards towards our destination our attention was directed to an alligator of enormous length, which was swimming along against the tide `(here very strong), at a rate which was perfectly astonishing. I never beheld such a monster. It paused within a very short distance from us, it's head and nearly half it's body out of the water. I should think that it could not have been less than five and forty feet long measured from the head to the extremity of the tail, and I am confident that it was traveling at a rate of at least thirty miles an hour."
-W.H.Marshall, Four Years in Burma

"The biggest crocodile I have ever seen. Comparing him to the Aja which lay in deep water some three hundred yards off, I reckoned him to be quite fifty feet long: whilst the center of the saw-ridged back must have been some four feet off the ground where his belly rested".
"I saw an enormous crocodile - longer I am certain than the Aja - rush across the bank and tumble into the deep water beyond. I never before saw such a large crocodile move so fast, and I had no time to get a shot at him. He must have heard us coming and was trying to make for the deep water on our side of the bank, when we ran into him and hammed him onto the sand. We struck him, moving at a rate of four miles per hour, but during the short time he was in view I could not see that he bore any marks of the collision!"
-19th Century Belgian explorer, John Reinhardt Werner